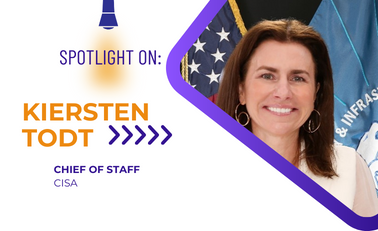 I got interested in cyber when I was working on Senator Lieberman’s personal staff in the summer of 2001, when the Senate flipped from being a Republican majority to a Democratic majority because Senator Jeffords became an independent.

Senator Lieberman became Chair of the Governmental Affairs Committee and asked me to join his committee staff. My first assignment was a hearing on critical infrastructure protection scheduled for September 12, 2001. 9/11 happened on that Tuesday and we were the only hearing to happen on that Wednesday. During that hearing, Senator Lieberman announced there should be a Department of Homeland Security before that the term wasn’t even used regularly.

Traits that have set me up for success include perseverance, curiosity, and conscientiousness. As we all know, we must persevere to solve complex problems and pivot when we confront obstacles. It is critical that we always remain curious and ask questions and challenge ourselves to be open and think differently. And, regardless of what we are doing, we should always deliver the highest standard of work.

Something about me you may not know is that I love bridges and what they represent.

I have enormous respect for the intellectual capability it takes to design and construct bridges – and I love their beauty. They are such a powerful representation of community connection.